I found out my gramma had died when I was in Ghana. Unable to get a flight back for the funeral in time, I mourned alone (well, almost – see my last post: MY GRANDMOTHER “WAS KIND OF A BAD-ASS”)

When I finally worked up the nerve to email my sister the next day, she told me my gramma wasn’t in any pain. No one knew why she was hanging on still, but everyone told her it was okay to let go. The Chaplain came by and did a blessing for her.

With my maternal grandmother in 1989.

My mom and my aunt stayed with her the whole night. Around 5 a.m., she stopped breathing, but her heart still beat for another twenty minutes.

“She was so strong and never gave up!” my sister wrote me.

I didn’t want to make the same mistake after my gramma’s death as I did after my grampa’s, becoming so consumed by my grief, I was unable to think of or tell stories that were important to share. I was a storyteller after all – that was my job. 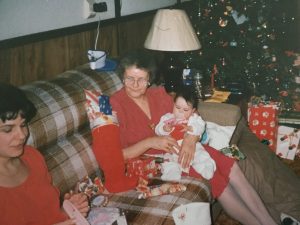 With my gramma and my mom at Christmas 1989.

Thinking about my gramma also brought up happy and sad memories. Gramma made the best birthday cake because she hid money in it, mostly five and ten-cent coins, but one lucky person always got a loonie. That person felt enormously rich, if not financially, for all the bragging rights they earned.

She taught us to play Uno and Rummy. She loved the casino and I remember not being able to wait to be old enough to go with her. I settled for the Scratch and Win’s she bought us every year for our birthdays, the number corresponding with our age. I loved when she babysat because she would let me watch her afternoon “soaps” with her – maybe that’s in part where I got my passion for a good story; I was enthralled with the love triangles of daytime dramas.

When I first got my period, Gramma didn’t have Ibuprofen on hand like my mom did. Instead, she made me ginger tea and gave me a hot water bottle. I was surprised that the home remedy actually helped ease my cramps.

A few months before she died, she showed me how to make her famous, family perogy recipe. I took meticulous notes, indicating even the slightest thing she did with her hands, the amount of pressure she applied to the dough – so I could recreate the delicious meal. I still have never even tried to make them since. I knew that if I failed it would only summon the feeling of loss to the surface and I didn’t want to face that.

My gramma’s sister, who I called “Aunty Sister” growing up

Despite the fact that death makes me anxious. In general. I don’t like thinking about it, it has only become a realization for me now as an adult that our grandparents had a much bigger role in life than just spoiling us.

Last week, my mom sent me a text message with a photo of my great aunt in her nun habit on top of a giant tractor.

“Talk about bad-ass,” she said, in reference to my last blog post.

When the whole political system seems depassé and cumbersome – like societal change just takes too long for our immediate technical age – it seems a shame the creators of these systems aren’t here to remind us of their context. My grampa, for instance, used to read the daily paper from front to back. I read the news on my phone through Twitter, mostly skmmining headlines while I’m flying out the door. I wonder what he would have thought of Twitter.

I wonder if what he would have said if I’d told him I was trying to embrace the “Slow Media Movement” by reading more books and long articles – in their entirety. The excessive amount of information we’re bombarded with routinely makes me feel overwhelmed, which is why I’ve taken to reading more about early Canadian history (you know, how things were back before the internet). Reading about past reform movements calm my heart palpitations.

Following confederation until the 1920’s, Canada was entering into the industrial revolution and was facing, as a result, major transformations in society. History repeats itself – think of the societal transformations of the digital revolution we’re going through right now. 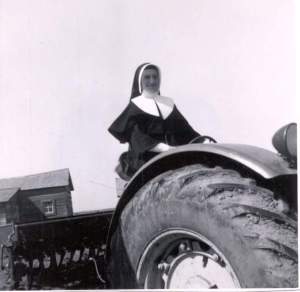 My great-aunt on top of a giant tractor. Young at the time of the industrial revolution, I wish I could talk to her now about digital revolution.

People were flocking to cities in search of new opportunities and higher wages, but unemployment in these fast-expanding centres remained high. Many city-dwellers lived in block tenements and slums where alcoholism was rampant. With minimal labour legislation, those employed in factories or on the railways were subject to appalling working conditions. This lead to the Social Gospel movement and the call to governments for reforms “to clean up society”.

At the same time, increasing discontent among rural people lead to the Progressive and Farmers’ movements. There were also calls for urban reforms: to eliminate the slums, create subsidized housing and government control of water, power, telephones and transportation.

Women’s movements, as well, gained support leading up to the First World War. Although many of these movements initially suffered setbacks at the onset of the Great War in 1914, as the war raged on, it actually helped to further the causes of the labour, prohibitionist and farmers’ movements, and was instrumental in extending the franchise to women.

Early reformers were the first crusaders for economic equality and social parity, but they were not a unified force and were often prejudiced and short-sighted in their goals.

After confederation, churches played a key role in trying to improve the lives of those so adversely affected by the new industrial and capitalist system. The Social Gospel movement that included Methodists, Presbyterians and Baptists began to take hold at the turn of the century. They were the country’s first social reformers, but their main objectives were still “spiritual salvation and social purity” and to conform to “Canada’s Christian beliefs.”

In 1907, after pressure from these protestant churches, the federal government introduced the Lord’s Day Act. It banned working, shopping, and commercial leisure activities on Sundays, so that Canadians would observe the Sabbath.

“Toronto the Good”, as it was called in the late 1880’s, went so far as to add a “morality department” to their police force.

This department was mainly concerned with preventing the destitution of young women and girls. It was also during this movement that gay sex and same-sex marriage was outlawed and practicing homosexuals faced prison sentences.

The temperance movement gained steam during the early twentieth century as another important movement. Progressives and women’s associations representing both urban and rural people, strongly advocated for prohibition, believing it would help solve many of Canada’s social problems at the time.

Associations like the Woman’s Christian Temperance Union (WCTU) conducted large-scale education campaigns and promoted the enfranchisement of women, as it was widely believed that women would use their vote to bring in prohibition.

Employers routinely abused and exploited their workers, particularly women and immigrants. However, after several decades, unions slowly gained support and “…the strike became firmly established as labour’s chief method of attempting to win improvements for workers.”

Some of labour’s first accomplishments were the declaration of Labour Day holiday in 1894 and the creation of the Department of Labour. However, in an unfair 1907 act that greatly favoured employers over workers, the first deputy minister of labour, William Lyon Mackenzie King prohibited striking while a labour dispute was being investigated. In 1918, strikes were completely banned for the duration of the war. Workers still continued to strike and there were more demonstrations in that year than the three first years of the war.

During the Great War, radicalism, especially in Western Canada began to emerge as a result of failed attempts at labour reform. Activists, in some cases, pushed for the abolition of capitalism, which they believed was a system that put property ahead of people.

Part of reason for the labour movement’s limited success was its exclusion of ethnic minorities and women from unions’ membership. Conrad and Finkel note, “During Canada’s rise to industrial maturity, labour organizations were fragmented along regional and cultural lines.”

Because of discrimination, unions alienated people who would have sympathized with their cause and benefited from their membership.

Due to the need for women to take over the jobs of men during the First World War, first-wave feminism began to gain support. Initially believed that it would be a short-lived war, most assumed that women would return to “their places in the home” when the men returned. However, the tendency for smaller families and public schools had already moved traditional women’s work outside of the home.

Recession also meant that wives had to get jobs as well as their husbands to support the family. The women’s suffrage movement became a multi-faceted campaign to gain a host of rights for women. Not only did suffragists push to extend the right to vote, but they also fought for the right of women to attend universities and for better labour conditions in the workplace.

These groups were met with backlash in the beginning:

“Misogyny and anti-feminism were widely expressed both orally and in print by people determined to keep women in their place.”

Ethnic minorities and immigrants have always had an extra challenge in facing discrimination and hostility from the predominant classes, but the reformers’ fight for more equality and democracy set the groundwork for shaping our country into what could become a cultural mosaic.