Someone asked me not so long ago what I thought was the girl’s equivalent of The Catcher in the Rye and I thought of Aleta Dey.

Francis Marion Beynon’s 1919 semi-autobiographical novel was the book that defined my teenage, coming-of-age years. My dad found a copy in a box of old books a client had asked him to take to the dump when I was about 13 and I cherished that book for years. 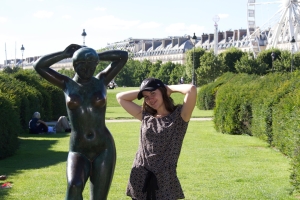 The novel, Aleta Dey, had an immeasurable impact on my becoming a young woman and understanding the world. Paris, France 2013.

I could have been the protagonist, Aleta Dey, a prairie-born journalist and suffragist during the First World War, who struggles to stand up for the things she believes in because she is so often in the minority. She calls herself a “coward” :

“I, on the other hand, had often the unpleasant aggressiveness of timidity; the self-assertion which frequently arises from being driven by an unknown urge to defy authority of which one stands in awe.”

I so related to her, her inner turmoil and her strongly-held convictions. It’s evident in my own book, The Year I Turned 25, my own female version of The Catcher in the Rye.

I list Francis Marion Beynon as my most influential author on GoodReads.

Unfortunately, I leant out that original copy years ago and I never got it back, so when I was reminded of it recently, I purchased three copies online in order to not repeat the same mistake.

The package arrived several days later, three thin paperback copies wrapped in brown paper – I sat holding them for a long time, flipping them over from front to back. I was scared to re-read it. 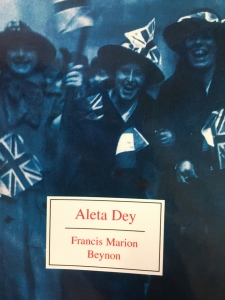 Aleta Dey had been so powerful – had more influence on me than any other book I’d ever read, had challenged all of my deeply-held beliefs to a point I didn’t know was possible, that I was scared of what it would do to me the second time around.

Only 194 pages, it is so beautifully written, so heartbreaking in its analysis of the structure of society and its faults, that it challenges socialism, capitalism, church and government in an achingly-compelling supplication for mechanisms to protect the human soul:

“Otherwise the new heaven will soon become as exclusive and aristocratic as the old and our new earth a fresh monument to tyranny,” Aleta surmises.

It took me months before I had the guts to pick up the book again, but once I did I read it cover to cover in only a couple days. It was even more relevant than I remember it being. And it made me even angrier than it did at 13 that it wasn’t required reading at school. At school, we only read stories about male protagonists, or tomboys. 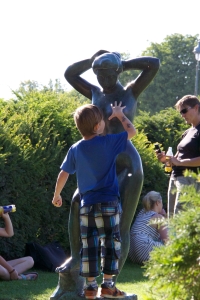 How different are men’s and women’s coming of age stories? Paris, France 2013.

There is one part that struck me that I hadn’t remembered. In one scene, Aleta is released from prison for pacifism and “radicalism” and she cautions her stepson against believing too easily in the war propaganda:

“‘You have a right to hear the other side. Read any of the radical magazines and books in my little library – ‘

‘They’ve taken them all away,’ he interrupted.

‘Then read your history and think, sonny. Or read what the editors are saying, and think. Or read the Bible and think. Or read nothing at all, if you like, but think. Think of your own experience on the playground at school. Think whether it is not true that a soft answer turneth away wrath; whether love or vengeance is harder to resist.’

‘I have been thinking, little mother,’ he laughed, ‘until my cocoanut’s aching.'”

I wish more people thought until it hurt their coconuts…too often, I think information is consumed, but not digested.

I read about these women, Aleta Dey or Sophie Scholl, these women who didn’t wait for Prince Charming, but rather turned to Jesus for the strength to do what was right. I want to help them carry on their mission and that is my goal with this blog.

It’s a working notebook, made public. This ongoing process, this blog form is bigger than just me and my inner reflections – it’s reaching out to other people with the same goals – to create a new humanity. I’ll spend the rest of my life trying to accomplish that task, and if I can’t my blog will be full of ideas and failed attempts for someone else to take over from me.

Here are some initial ideas for how I think we can construct a new humanity.

It seems to me that if we are to create a new world we need to first allow dogs to go wherever people go. Wherever there are people, there will be anxiety, stress and pressure and dogs are a calming force. They are needed.

Next we need to encourage the belief in a higher power. But not like church and religion have done in the past, with staunch dogma and strict control over morality. We need to make spirituality more personal. Those who have met and fallen in love with Jesus need to introduce him to others who haven’t yet.

We need to frown on judging others. We need to create safe spaces where people can be free to explore the concept of humanity outside of the rules of society, but in a place where they won’t be a danger to themselves or others. I don’t know yet what that would look like.

I think we need to start reading Aleta Dey in schools, so that young girls can think, digest and debate their own coming of age stories.