Just a note on the langue quebecoise: while my French vocabulary is steadily increasing, it’s my English that really needs work. Quebecers have co-opted any number of English words by chopping off all but the first syllables. For instance, a “mush” (pronounced more like “moche”) is a mushroom. A “snow” is “snowboard.” Likewise, a “skate” is a “skateboard.”

Parting gifts between me and Sam before I left to Quebec City.

Quebecers are very expressive and Quebec politicians in particular don’t mince words. Common expressions include, “It’s a total mess,” “complete lack of judgment,” and “totally unacceptable.” I once heard uttered the equivalent of “lying bastard” without so much as a batted eye.

It was all a little overwhelming at first. I moved to Quebec City on December 31st. Dad, who came with me to help me get settled that first week, and I stumbled into an outdoor New Years’ Eve party with twenty-some thousand fêtards in the middle of Grande Allée. We rode a Ferris wheel – from the top I took in the view of my new city and I understood why they called it a winter wonderland. At midnight, they shot off fireworks that lit up the sky above the legislative building, the National Assembly. It was a pretty incredible welcoming committee. 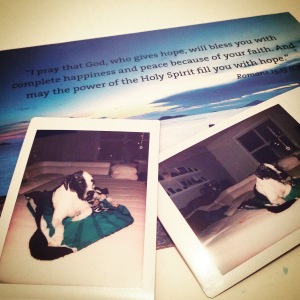 Flayla and I sent cards and pictures back and forth. I missed my little She-Devil!

I found a cute, one-bedroom apartment in Old Quebec, a seven-minute walk from the National Assembly. At 26, it was the first time I’d ever lived alone. I ruined my coffee pot by leaving it on a hot stove element. My shoddy laundry machine, which was probably as old as my heritage apartment building only washed about 40% of my clothes, so I cleaned my socks and underwear by hand in the sink and hung them up to dry on my kitchen cupboard knobs.

I started a dishrag on fire and had a nervous breakdown when the latch on my back door broke because I thought I’d been burglarized. But other than that, I got by okay and I surprised myself by how much I appreciated the solitude. On Friday night, I’d walk home and stop at my corner dépanneur for a bottle of wine.

I put Sam’s picture next to my typewriter in a corner in my apartment.

With a fresh glass of wine at the ready, I taught myself to cook.

That year, Quebec City had this on-again off-again relationship with winter (but not precipitation) resulting in a real adventure every morning on my way to work. The sidewalks were either covered in snow, or completely iced over – or a combination of the two which was the most treacherous. My colleague told me that ice chunks often fell without warning from the rooftops in the old city. I agreed that it wouldn’t be a very classy final chapter of my life if I was taken out by a large chunk of falling ice and every morning I made it to work alive, I was slightly relieved. 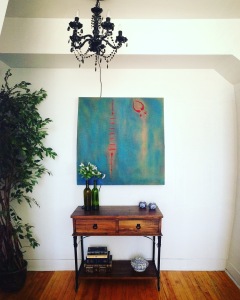 My apartment in Old Quebec, an historic building and the first place I ever lived alone.

I finally got my apartment insured after I started that small kitchen fire. My French greatly improved after one embarrassing moment when I asked my colleague for his handcuffs instead of the TV remote (yeah, that was awkward). I found an awesome Yoga studio where I found equilibrium Monday nights and learned French vocabulary for body parts I didn’t know I had.

In February I started dating a guy with a washing machine and my quality of life greatly improved. He has two girls, 13 and 15. By summer, we started spending a lot of time together as a family, taking the girls camping, to the beach, to the water park and to La Ronde (the permanent amusement park in Montreal) where I passed out on a roller-coaster and then puked. The girls were super comforting and took good care of me.

I moved to Quebec City to take a job as a political reporter.

In October, the four of us went to visit a Samoyed dog breeder and that sealed the deal. Now that we were expecting, it was only natural the house hunting begin. And that’s how I ended up with a fur baby, two step daughters and a real adult life.

When I returned to Regina, I spent quality time with Flayla Flay who I’m pretty sure forgot who I was, but was happy to hog my bed with me again anyway. I missed home, but as a journalist, I knew I was in the best place to make as much of a difference as I can.

Mosley is not sure of Mr. Bonhomme, but boy, does he love Carnaval. Outdoors, people, puppies, snow, maple taffy 🍁 it’s a #samoyed #winterwonderland #quebeccarnaval #chateaufrontenac
Follow Raquel's Books on WordPress.com