I cut off all my hair.

It wasn’t exactly a snap decision, but I guess you could say it was a bold one. Two months after I turned 26, I walked into the salon, sat down at Jody’s chair and showed him a picture of a young sixties-inspired model with a chic pixie cut. His eyes went wide.

I nodded enthusiastically. This is gonna be so much fun!

Even after he brought out the scissors, I never hesitated. I never winced as I saw my long dark locks I had been so desperately clutching to, hiding behind, even, for years, drop to the floor in a heap.

Jody snapped a before and after photo and posted it to Instagram where in his words it “blew up” with overwhelmingly positive compliments about my “cute new do.” 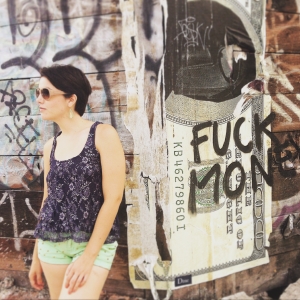 I let the positive comments from strangers on the Internet slide off my shoulder as much as the “honest” comments from my closest friends who also wanted to know what provoked such a drastic change.

Why did I want to become a new woman? they all asked. It’s funny how much significance we attach to people’s appearances…

The answer is not that straightforward: I’d wanted to cut my hair for a long time, but I was waiting until after I got married (just to be clear I was never close to even getting engaged), that way I wouldn’t have to worry about growing it out or getting extensions for the big day (because you know, God forbid I have short hair on my wedding day). I don’t know when it was that I came up with this idea, but one day I finally realized, Wait. I’m not getting married. I don’t even have a boyfriend. Why the hell am I waiting for Prince Charming to decide how I want to wear my hair?

I also wanted to cut off my beauty. I was tired of it. I was tired of caring for it, maintaining it, taking pride in it. I was about to accept a new position as a political reporter – an opportunity I never thought I’d have and I wanted to concentrate on things that were more important.

In my early twenties I went to the gym every morning. I’d wake up at 6 a.m., pack my bag for work with a breakfast, lunch and sometimes even supper if I’d have to work late.

I do remember, however, being tired – all the time. Like my dad would say, you can’t burn the candle at both ends. Working overtime to get better job opportunities, a social life, daily exercise – and then on top of it all, trying to maintain these impossible beauty standards – at a certain point, something’s got to give.

In the end, it was my mental health. After finally getting my anxiety under control, I knew I needed to cut out everything that was not essential, literally. Okay, I’m only half serious – cutting my hair off was more symbolic than anything, but it did make me feel better, like it was the first step to my new healthy life.

I wish I had pushed myself to question all those strange, illogical thoughts and reasoning in my head a long time ago. If I had, I might not have waited as long as I did to meet a friend of mine for drinks a week after my haircut in a short skirt (actually, there’s nothing wrong with my legs) and no make-up (actually, there’s nothing wrong with my complexion) many times before. My harsh and unforgiving inner monologue had kept me from doing a lot of things.

My friend – a fellow media colleague, met me on the sidewalk and instantly commented that she thought the short hair suited me really well. Determined to have some patio drinks we’d been promising each other for several weeks, we finally located a downtown bar with an open seat protected enough from the gushing Saskatchewan wind that kept blowing up dirt and sand into our faces and wine glasses.

Our conversation started at work and then soon drifted to relationships, like it always did. I told her about The Bearded One, as I referred to him because of his long and curly beard and moustache that covered his top lip; he was a furry teddy bear I’d met at my cousin’s wedding. He was enormously patient through my drunk babble that began with a proclamation of my continual love for my ex-boyfriend and ended with my asking very pointed questions about his relationship with God.

It might not have been the best date, but it was sure a good story and my friend and I were both laughing loudly about it when our server returned to refill our water glasses. We abruptly went silent.

“I’m just here to fill the water. I promise I’m not listening,” our good-looking waiter said in order to make things less awkward.

“No, it’s alright,” my friend said then, slightly embarrassed. “It’s just a little girl talk. Perhaps you’d like to join in?”

“Right,” I quipped. “We were actually just talking about the perfect age to get married.”

“Are you married?” my friend asked the waiter.

I eyed his whisked blonde hair and hipster style.

“In that case, would you like my card?” I asked, reaching for my wallet.

He took it and promised to ask me out later that week, although I wasn’t sure he meant it. My friend sat surprised and a little admiring after he walked away.

“I can’t believe you did that,” she said.

I have to admit there was a little adrenaline rush to be so daring, but after that adrenaline wore off, I thought the same thing – I can’t believe I did that, and I began to regret it. I had spent the past year trying to deal with being repeatedly and consistently sexualized as a single woman working in media and here I was hitting on someone at his place of work. I was actually mortified.

Maybe I was a new woman after all, but was I now also the predator? I thought about the types of comments I had received since my hair cut – from the innocuous (older men who didn’t quite know how to make a compliment sound appropriate) to those that made me more uncomfortable (a long-winded personal message from a man who couldn’t understand why I didn’t have a boyfriend, since I looked so good). I lived in a fish bowl, but what I hadn’t realized until just a short time ago, was that the fish bowl was also full of sharks.

The server’s name was Morgan. And true to his word, he did text me, but we never did go out. I can’t say I was disappointed. He also worked in an industry where he was likely to often be sexualized and I was ashamed of my tipsy, albeit harmless, come-on. I didn’t want to start acting like a shark just because I was sick of being a fish for so long. I didn’t want to be a shark ever.

I had to check myself because I had decided not to play this game of Sharks and Minnows any longer. I had just come to the end of a yearlong “autonomy project” I was documenting online: it was my attempt to become more grown-up, more independent, less concerned about the trivial, less distracted by men.

I wrote about even the most embarrassing things that happened to me that year on my blog. I didn’t have to tell anyone, I suppose, but the Selfie blog was getting thousands of weekly hits – if I had been there, others had been too, I realized.

It was personal, narrative journalism that people appreciated and reacted to positively. It was my safe space on the internet. And maybe through all this I would find my voice (assertive and unashamed) as a young, professional woman simultaneously in search of autonomy and a husband. That’s what being in your 20’s is like! And, like a lot of people, I had made enough mistakes throughout the course of that search to fill up an entire book.

Here’s the book:  You will read about my failed attempts to date a divorcé, marry a man named Terry, train a demon puppy and medicate my anxiety disorder. I spilled my guts, documenting prospectively (that is, as I moved through it) my life at a quarter of a century, trying to turn it into something useful.

My year of self-portraits and self-exploration became the year I told everyone (almost) everything. They are the stories I told the world in real time as they were happening. My sister read it; my bosses read it; my parents read it; strangers read it. By the time I’d stepped over that precipitous line from early to late twenties, I’d written enough to make all their toes curl.

But what do you really gain from keeping secrets anyway? Through airing all my dirty laundry, I had come to know myself, really know myself.