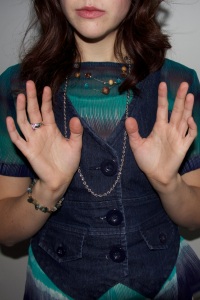 Paragraph 1: I know yoga is a traditional exercise to stretch and tone the body and discipline both body and mind. It’s a spiritual practice to learn control over your thoughts and emotions and helps with concentration and finding “balance” in one’s life.

My mom, who used to practice yoga when I was a little kid, did it for relaxation. I remember her breathing obnoxiously loudly and I used to giggle at some of her “outrageous” poses. I think there is such a thing as laughter yoga, so maybe I wasn’t as ignorant as I feel looking back on it. After my little brother was born, she would do these yoga poses to help strengthen her core muscles again. My sister and I would put our heads under her stomach as she did abdominal lift on all fours, like in cat stretch, and she would suck in her flabby belly and push it out again. We would laugh hysterically and then try to emulate the position, taking turns doing it over top of each other’s heads and trying to get the best reaction from each other.

I was about six years old then. At that time, yoga was this ancient lost laughter art, but when I became old enough to start practicing yoga seriously – maybe 12, it just became frustrating. For starters, the model in the book my mom had was about 95 pounds and flawless in her looks and poses. I was close to 120 pounds (heavier than I am now, actually). The model could also do a headstand without trying. I tried – and tried – and tried. I could never do it. Yoga was a spiritual ancient art and laughter was part of it perhaps, but as an acne-prone, overweight, self-conscious teenager, I didn’t think anything that had to do with my body was very funny. I didn’t start practicing yoga again until I was an adult and have struggled ever since with flexibility, strength, and worst of all, meditation. I have gotten better at all three, but I can’t remember ever laughing while doing yoga since I was six. I’m hoping this class which I’m in for the sole reason because the universe has willed it, and I don’t have much time left in it, will change that.

According to Dr. Georg Feuerstein, who died in 2012 after devoting much of his life to the practice of yoga, even publishing The Encyclopedia of Yoga and Tantra (2011), among numerous other books on the tradition, explains that Yoga with its 5000-year history is “complex” and often overwhelming to the beginner. Still, he ascertains, there are ten fundamental principals, which will help with the overall understanding of Yoga as a practice and philosophy.

Feuerstein begins his essay, entitled “Ten Fundamental Principals of Yoga” with the overarching principal that Yoga as a discipline aims to “free” its practitioners from their external attachments. He writes, “(Yoga) seeks to liberate us from our limited notion of who we are. We habitually identify with our particular body, mind, possessions, and relationships (which we often treat like possessions). But this mental-emotional habit, according to Yoga, is really a profound and fateful misidentification. It keeps us stuck in our behavioural grooves, causing us to experience suffering (duhka) over and over again.”

Okay, I’ll buy it. I’ll admit I often treat my relationships like possessions and am prone to suffering the same type of suffering over and over again. In fact, I have made a personal vow this month to quit suffering. I am on a personal mission through these last three weeks of my surprise yoga class to rediscover my childhood laughter, or childish laughter, or childishness (any of the three will do).

Feuerstein goes on to describe the next nine fundamental principals of Yoga, explaining that as humans, we are something more than just our body or mind, or possessions or relationships and can be found through one or more of the different branches of Yoga, which include ones I’m familiar with like Hatha, Karma, Tantra and Mantra (although I have to admit I thought tantra had something to do with sex, which strikes me as strange now because if I’m not mistaken, I recall reading somewhere that true yogis were chaste). In any case, Tantra Yoga refers to working on ritual and visualization, whereas Hatha Yoga is working on physical transformation.

All branches of Yoga are rooted in a strong morality and a “thoughtful and mindful practice,” in which the yogi encompasses virtues like nonviolence, truthfulness, abstention from theft, compassion and kindness, and as I suspected, chastity, otherwise known as brahmacarya. Now, does that not describe me to a T? I am really exceptionally moral.

Unfortunately, Feuerstein explains that despite this morality, the real pursuit of Yoga is discovering a “transcendental Consciousness [sic].” That is to say, there is a commitment to self-transformation: “the practice of Yoga calls for considerable personal effort (vyâyama), which involves self-discipline (âtma-nigraha). As we endeavor to replace undesirable habit patterns with positive ones, we inevitably experience a measure of frustration.” Ah, shucks.

Feuerstein ends his essay around the concept of self-realization. He writes, “Only seekers striving for liberation as if it were a trophy glamorize the yogic process and themselves. They want to be extraordinary, whereas liberated beings are perfectly ordinary.” (So scratch what I just said above about being exceptional.) And he continues, “They are as happy washing dishes as they are sitting quietly in meditation or teaching their disciples.” Now, I don’t know about you, but I would much rather have disciples than wash dishes. Master Raquel has a nice ring to it, don’t you think? Ok, so I have a lot of work to do in the department of self-transformation. Oh, and I’m super stoked about it (note sarcasm): Raquel, the exceptional, totally egotistical, extraordinary is going to become just plain old ordinary Raquel: no frills, no ego, no exceptional being.

Luckily, the author is encouraging. Yoga requires patience and our “patient cumulative effort (will) flower into Self-realization [sic] sooner or later.” He also counsels on the importance of following a good Yoga master. Poor Colin has his work cut out for him, then. But I’m keen. Let’s give being ordinary a shot – it sure as hell beats suffering.